I spent the years between 2000 and 2004 at Our Lady of Mercy Academy, an all-girls Catholic high school on the north shore of Long Island. I wore a uniform, which consisted of a sweater that seemed to make me itch no matter how many times I washed it and a white polo, plaid skirt, knee-high socks, and a pair of Oxfords.

My life was pretty routine. On the days I didn’t hit snooze, I willed myself to remain awake as I washed my hair before getting on with the rest of my morning routine. On days when the covers were too warm to shake off, I used a spray bottle to wet and style my hair, doused myself in GAP Dream, and made sure I had an extra Teen Spirit in the front pouch of my Jansport. But, this particular day was anything but routine. It wasn’t just any Thursday – it was Valentine’s Day.

The summer before my sophomore year at OLMA, my parents decided I needed to join a sport. They didn’t think Windows – OLMA’s literary magazine – was the type of extracurricular activity colleges would be impressed by.

As I scanned the list of teams conducting summer tryouts, I was on the lookout for teams who didn’t practice more than twice a week, which proved to be a challenge. There was no way I was trying out for volleyball. Not only did I have terrible hand-eye coordination, but I couldn’t think of anything worse than spending my Monday and Wednesday afternoons with Christina Finelli. Badminton was on Tuesdays and Thursdays, but Lauren Strongreen still thought I’d tried to set her on fire in chem. That left bowling and swimming.

I thought bowling might be fun until I read the asterisk note beneath Swimming: Practices held on Tuesdays and Thursdays, 7:00PM to 8:30PM at Chaminade High School.  Chaminade was the all-boys Catholic high school several blocks from my house. I was sold.

I met Chris a few weeks into the season. I’d seen him waiting for the late bus before practice started, and mustered up the courage to actually speak to him shortly after Thanksgiving break. By Christmas, we were chatting on AIM regularly.  Shortly after the new year, we began sneaking into the third floor locker room to make out and I’d decided I was ready to let him feel over my bra. I guess you could say things were getting pretty serious. With Valentine’s Day fast approaching, I had no doubt he wouldn’t let me down.

On the first February 14th I spent at OLMA, the afternoon announcements began about forty-five minutes earlier than usual. Sister Monica’s voice came over the PA system and said, “Good afternoon, ladies. It appears the blessing of Saint Valentine’s Day has come to Mercy, and filled our halls with love and roses. Will the following girls please come to the lobby to pick up their flowers.”

I watched the door leading out to the hallway in awe as girls returned to class with bouquets of roses, teddy bears, and chocolates – desperately wanting to be one of them. Now, as I approached my second OLMA Valentine’s Day, I knew I would be.

“So, what do you think Chris is going to send you?” Sam giggled in homeroom.

“Are you sure he’s definitely going to?”

“Of course he is! I’ve been dropping hints like crazy. I even put a countdown in my away message. There’s no way he doesn’t know.”

“If there’s candy, you have to share with me.”

I spent the rest of the day wondering if Chris was going to do flowers or take it a step further. He seemed to be the traditional bouquet of red roses type, but then again, he was always surprising me. Suddenly, I heard Sister Monica’s voice over the loudspeaker – the time had finally come.

It seemed there was no particular order to the roll. The first five girls to get called down were all seniors, followed by three sophomores and a junior, and none of the last names were in alphabetical order. There was no way to know when I was going to hear my name.

When two girls from the back of class got up and made their way to the front, I began to get nervous – what if he forgot? What if he mixed the days up? What if he doesn’t love me? I wondered how I would ever deal with the same of not being called when Sister Monica said, “Lauren Sharkey, Stephane Krizakis, Monica Newn.” I leapt from my seat and nearly ran down the stairwell to the lobby where a line had formed and waited.

Sister Margaret made quick work of the line. Even though she was my least favorite nun at Mercy, I couldn’t help but smile as I approached.

“Ms. Sharkey,” she said sternly, checking the cards of the bouquets before her. There were three – two with pink roses, one with yellow. She shook her head and made her way to the corner of the office where an enormous red bouquet, complete with a balloon and teddy bear sat.

Could I be that lucky? I wondered.

“Sister Pat,” she called across the hall, “could you help me for just a moment?” Sister Margaret advised Sister Pat to help with the rest of the line while she looked for my valentine.

Several minutes had passed, and I wondered if Sister Margaret was doing this on purpose. Sister Monica had finished calling the names, and the line was getting shorter. They were both looking through the remaining cards now.

“Ms. Sharkey,” Sister Margaret began, “I’m so sorry to be the bearer of bad news, but it appears Sister Monica read the card wrong.”

“Yes,” Sister Monica agreed. “It was Lauren Szollozi’s bouquet.” She squeezed my shoulder, watching the news make its way through my ears, into my brain, and out of my eyes. “I’m sorry, dear.”

“That’s okay,” I lied, refusing to cry in this office. “I’ll just get my things from my locker and wait for the bus.”

“You will return to class, Miss Sharkey. There are still thirteen minutes of last period,” said Sister Margaret.

“What?! You can’t expect me to go back up there with nothing!”

“Miss Sharkey, you will return to class or earn detention for ski-“

“The detention please!” I screamed.

“That is not an option,” Sister Margaret said. “Return to class.”

“But you just said…”

Sister Monica tugged my hand and walked with me back to Health class, attempting to ease my pain by telling me the first boy who sent her a Valentine accidentally spelled her name with a “k” instead of a “c”. When the class inquired about my lack of spoils, I lied and said the bouquet was so big that my parents had to come and pick it up later. I’ve hated Valentine’s Day ever since.

Lauren’s favorite submissions will be published on her blog for a special Valentine’s Day post! Winner will be chosen at random. Contest closes at midnight on February 10, 2019. 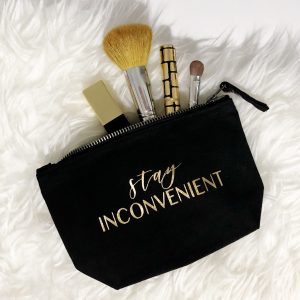 No purchase necessary. Submissions to enter giveaway begin February 1, 2019 and end at midnight on February 10, 2019. Must be 18 years or older and legal resident of the United States of America to enter. International entrants will be considered for inclusion on blog, but are not eligible to win giveaway. Giveaway winner will be announced on February 14, 2019. Winner receives (1) copy of Lauren J. Sharkey’s novel, Inconvenient Daughter, following official release date and (1) official Stay Inconvenient make-up bag. To enter, entrants must e-mail a Valentine’s Day themed story to theljsharkey@gmail.com before giveaway ends. Winner will be chosen randomly and contacted via e-mail. If winner does not claim prize within (7) days, new winner will be chosen.